How the booming port of Hamburg brought public transport forward, the HOCHBAHN was founded and a big city feeling developed thanks to the subway

At the beginning of the 20th century, Hamburg was a booming city: the economy was booming, the Hanseatic city had one of the most important ports in the world, and the population grew to almost one million people in 1900. New residential quarters were constantly being built for the new citizens of Hamburg, mostly on the outskirts of the city, for example in Barmbek or Eimsbüttel. And here was the problem: While most people lived on the outskirts of the city, many jobs were located in the center and in the port area. There was already a public transport system - horse-drawn omnibuses had been running since 1839 and were gradually replaced by streetcars. And the route network was also well developed, with 294 kilometers in 1902. But the journey times were long and the prices so high that it was precisely the low-paid day laborers who walked to work and spent several hours a day on the road. Thus, there was a lack of a modern transportation system that could transport many people quickly.

But the new means of transportation was supposed to do more than "just" get people from point A to point B. Rather, the Senate, the City Council and the advisory commissions were looking ahead. The aim was to provide comprehensive access to the city, affordable fares and a transport system that could be flexibly expanded to keep pace with urban growth. Therefore, the idea of building a suspension railroad like the one in Wuppertal/Elberfeld was quickly rejected. The steel structures with moving gondolas were too expensive and too inflexible in terms of construction. The solution for Hamburg: a subway.

After lengthy deliberations, on May 2, 1906, the Senate and the City Parliament passed a resolution by 115 votes to 13 for the construction of a subway by a consortium of Siemens & Halske and AEG. On June 1, 1906, the Senate then approved the construction contract: for the fixed sum of 41.5 million marks, the Berlin consortium was commissioned to build a subway ring around the Alster.

The construction of the circle line

After extensive soil investigations had been carried out along the planned route, construction work started in Hohenfelde on October 7, 1906 under the leadership of Siemens & Halske and AEG.  First of all, a conveyor track was set up to transport the overburden to a loading point at the Kuhmühlenteich. At the same time, work on the subway ring began in the vicinity and at seven other construction sites in the city: roads were torn up, almost seven kilometers of tunnels were built, around three kilometers of viaducts were erected, 1.6 kilometers of cuttings were dug, tracks were laid, and signaling systems were set up. By 1912, the ring line with 23 stops had been built, touching all important parts of the city. In addition, a workshop and a power station were built in Barmbek to supply electricity.

The architectural design of the stops followed a simple principle: If there were already buildings, the stops adapted to them in terms of style. Where possible, however, the stops also set new architectural accents. The result was a varied architectural landscape in which historicism and reform architecture can be found just as much as purely technical buildings. A trip on the Ringlinie is therefore also a reflection of the architecture of the last 100 years.

Construction work on the ramp behind the town hall stop, 1908

The open excavation pit of the main station, 1910

Erection scaffolding for the iron structure of the bridge over the Kuhmühlenteich, 1911

The ring line not only included track systems, substations for the power supply and 23 stops. The technical heart of the subway beat at Hellbrookstrasse in Barmbek: Car sheds, the main subway workshop, a power plant and the administration building were built on the 46,000 square meter depot. To supply the coal-fired power plant, a branch canal was also built, which still connects the Barmbek canal system with the city park today.

When operations began in February 1912, two halls provided space for 160 cars. By the mid-1920s, two more halls had been built, increasing capacity to more than 250 cars. Attached to halls 1-3 was the main workshop so that all maintenance and repair work could be carried out efficiently.

Opposite the workshop, on the canal, was an open storage area for coal, which was brought directly to the power plant by means of a large gantry crane and burned there to generate electricity. The first administrative building of the HOCHBAHN stood directly on the street. Until 1920, it housed the offices of the board of directors and the administration as well as washrooms and dining rooms for the employees.

The foundation of Hamburger Hochbahn AG

Shortly after construction work began, the search for an operator of the subway began. The consortium of Siemens & Halske and AEG finally submitted a bid in response to the public invitation to tender for the contract issued by the Senate and the Bürgerschaft in August 1907. Over the next two years, the consortium and a commission made up of five members of the Senate and ten members of the Bürgerschaft negotiated the operating contract, which was finally signed on January 25, 1909.

Shortly before the end of the construction work, Siemens & Halske and AEG finally founded the operating company, Hamburger Hochbahn AG, on May 27, 1911, as agreed in the operating contract.

The engineer Wilhelm Stein was appointed to the board of directors. Dr. Ing. Wilhelm Mattersdorff and

While construction work on the stops and tracks of Hamburg's first subway system began in 1906, it remained unclear for a long time what the subway cars would look like. After all, they are not available off the shelf; they have to be individually developed for the respective track profile. The almost 13 meter long and over 2.5 meter wide subway cars were built in a division of labor: The bodies of the first 20 cars were manufactured by SEG's wagon workshops at Falkenried, ten more each came from Linke-Hofmann in Breslau and MAN in Nuremberg, and five from Norddeutsche Waggonfabrik in Bremen. The technical equipment was supplied by Siemens & Schuckert from Nuremberg, AEG from Berlin, van der Zypen from Cologne and the Düsseldorfer Waggonfabrik.

The cars were divided into 2nd class with dark green leatherette seats and 3rd class with polished mahogany - 1st class would have been reserved for the Kaiser and was therefore not even counted.

From the outside, 3rd class could be identified by its yellow paint scheme and 2nd class by its red paint scheme. It was not until the end of 1920 that the class division was abolished.

On February 15, 1912, the time had come: The Ring Line was officially put into operation with the opening ride, which was attended by senators, members of parliament and representatives of the construction companies. Afterwards, thousands of Hamburg residents were able to ride the subway free of charge for two weeks. From March onwards, regular service started for everyone, at least on certain sections, because in fact the commissioning took place in sections:

By mid-1912, Hamburg had entered the age of the subway, and the ever-increasing distances between home and work could now be covered relatively quickly and comfortably. The speed of the subway, however, was completely new for most people, since very few had previously traveled by train or even by automobile. But the long walks were now a thing of the past, and passengers gained a little more time for themselves. Rides through tunnels and over viaducts also changed the view of the city, so in this respect the subway was more than just a technically advanced means of transportation. It helped to bring Hamburg closer together internally and to create a metropolitan feeling. This was also made clear by the development of passenger numbers: While more than 23 million passengers rode the Ring Line in 1912, the figure had risen to around 39 million by 1913, and the trend was still rising. However, the Ring Line was not to be the end of the story. It laid the foundation for the steady expansion of the subway system in Hamburg.

Participants in the opening run of the Ringlinie at the depot in Hellbrookstrasse on February 15, 1912

Ticket office at the entrance to the City Hall stop, 1912

All eras of HOCHBAHN history: 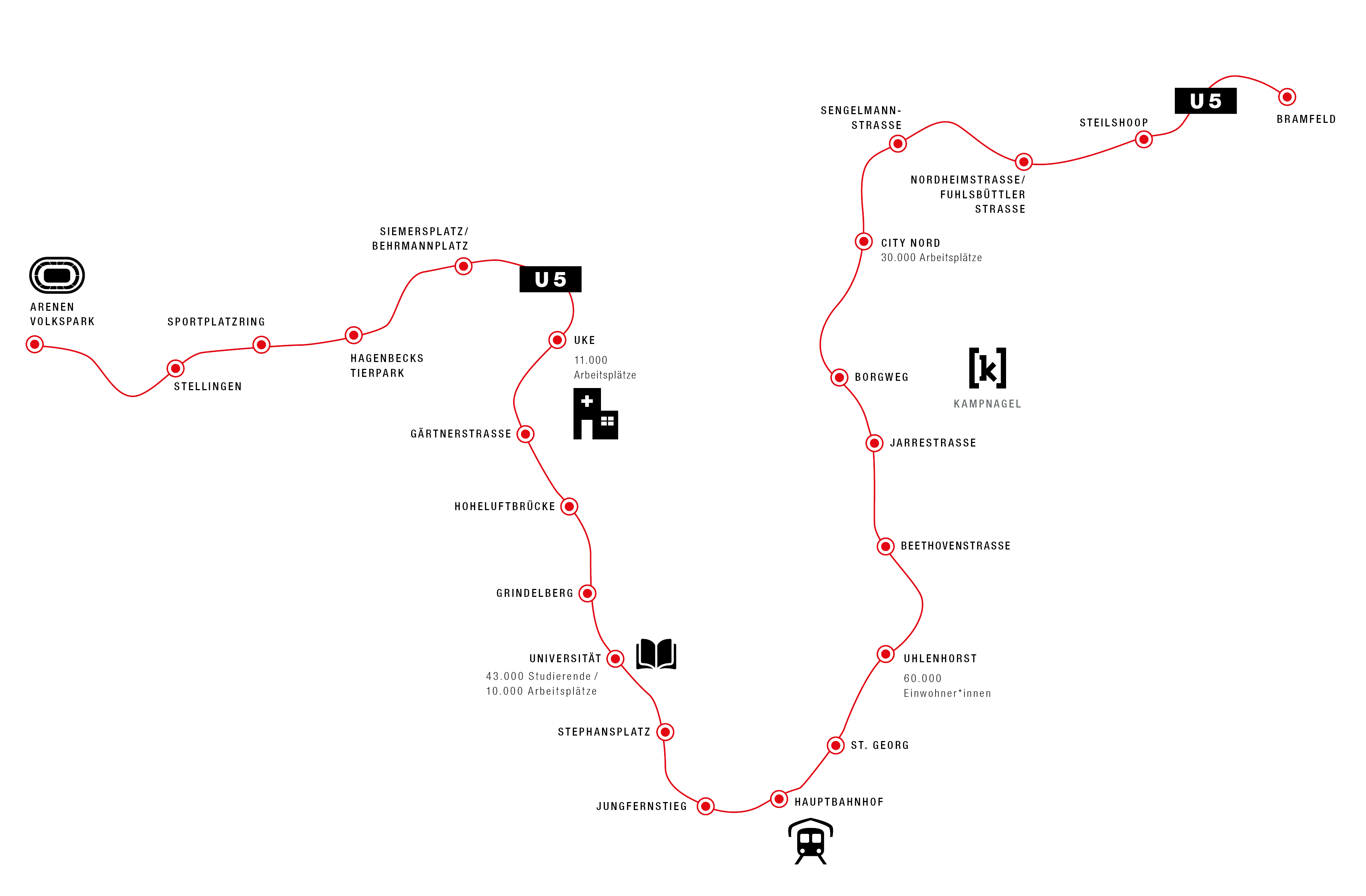